Save for them a place
Inside of you,
And save one backward glance
When you are leaving,
For the places they can no longer go,
Be not ashamed to say
You loved them,
Though you may or
May not always have,
Take what they have left
And what they have taught you
With their dying
And keep it with your own,
And in that time
When men decide, and feel safe,
To call the war insane,
Take one moment to embrace
Those gentle heroes
You left behind. 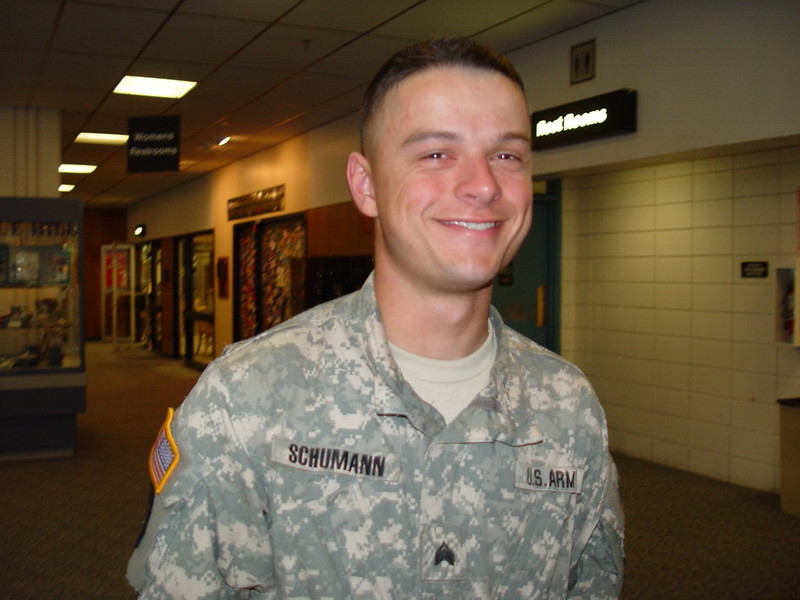 Dear Dee,
My son, SGT Jason Schumann, is at this link: http://mainetroopgreeters.smugmug.com/gallery/2614328#137944282 (page 9, March 22, 2007, 5:15pm) He is the one who looks tired but is smiling. He was always smiling. When he made it to Kuwait, I mentioned to him I had seen his picture online and how he was now a star. He didn't know his picture was online, but I could tell he was flattered. This is the image I have burned in my mind, it is how I choose to remember him. Thank you and the other greeters again, not just for taking Jason's picture, but for letting our soldiers know people care about them. Sincerely,
Candie Glisson


The Associated Press
HAWLEY, Minn. — Jason Schumann is remembered by his high school principal as a delightful young man who always had a smile on his face. The 23-year-old Army sergeant was killed May 19, 2007 when a bomb exploded near his vehicle in Ad Diwaniyah, Iraq, about 100 miles west of Baghdad, the Defense Department said May 22. Schumann, of Hawley, was the 60th person with strong Minnesota ties who have died in connection with the wars in Iraq and Afghanistan. Hawley High School Principal Mike Martin called his former student a “delightful young man in every regard,” known by some as “Tuba” for the instrument he played in the high school band. “He was an extremely happy student, kind of a free spirit of sorts, but in a very good sort of way,” Martin said. “We just thoroughly enjoyed him as a student.” His family’s pastor, the Rev. Tom Olson of Solem Lutheran Church, said Schumann’s unit was escorting a convoy to the Baghdad airport when it was attacked. Schumann was on his second tour of duty in Iraq, Olson said. Schumann’s wife, Laura, and son, Joe, who will be 2 years old next month, were staying in her native England while he was deployed. His father and stepmother, Jim and Sherry Schumann, live in Rollag, 13 miles south of Hawley. His mother and stepfather, Candie Glisson and Russell Toth, live in Fargo, N.D., about 20 miles west of Hawley.